Stop Using Hashes for Detection (and When You Should Use Them)

Fun fact! When I published the Pyramid of Pain in 2013 it didn’t exactly match up with today’s version.  Here’s what it originally looked like: 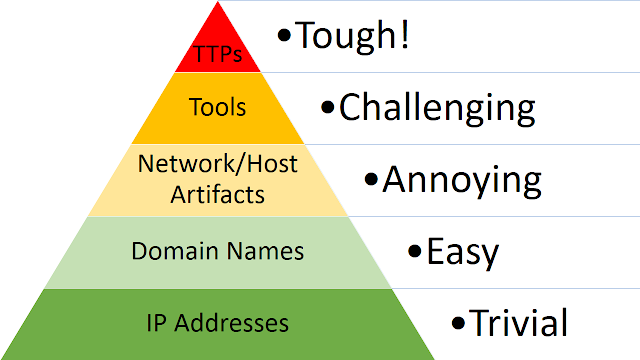 Notice anything different? The bottom level of the Pyramid was originally “IP Addresses”.  It wasn’t until almost a year later that I revised it to include a new layer for static hashes (e.g. MD5 or SHA1) as the bottom level.

It’s not that I forgot hashes existed. How could I, when they are a major component of many of our threat intel feeds? The reason I didn’t originally include hashes is because they are terrible for incident detection and using them for that is a waste of time.  It was only after I got so many questions about where they fell on the Pyramid that I relented and released a version including them at their rightful place on the bottom.

Why Hashes are Bad for Detection

I teach network forensics for SANS, and as part of that class we use the Pyramid to discuss the types of IOCs that forensics commonly produces. I start at the bottom of the Pyramid and work my way up, so pretty much the first thing I tell my students about IOCs is that hash values received from others (which we’ll call third-party hashes) are not useful for detection.  This is because hashes are the most volatile and easiest to change of all the common types of IOCs. Flip one bit, or maybe just recompile a binary and the hash changes.

Interestingly, hashes are by far the highest fidelity of all the common indicator types because they don’t generate false positive matches. If you are looking for a hash and you find a match, it’s pretty much guaranteed that you found exactly what you were looking for. Of course, I’m aware that hash collision attacks exist, but threat actors generally use those to match a known-benign hash value to evade detection, and we probably wouldn’t be looking for benign hash values for incident detection. We can safely discount those.

“Zero false positives” sounds great, right?? Here’s the problem with hashes: if you get a hot tip about a malicious hash from an intel feed or vendor report, you’re extremely unlikely to ever find a file matching that hash in your own environment. Hashes are just too easily and frequently changed to be effective as IOCs. The unfavorable effort/reward ratio means it’s too expensive for the tiny amount of value you get out of it.

I formed this conclusion based on personal experience running a detection program for a huge multinational company and my opinion hasn’t changed since then.  However, it recently occurred to me that “personal experience” isn’t measurable and therefore may not be the best data upon which to base such a conclusion.  I realized, though, that there might be a way to measure the detection effectiveness of hash values more objectively.

Fortunately, I have access to a searchable database of all the malware samples being submitted to VirusTotal, which includes among other things unique hash values for each submitted file, a count of the number of AV products detecting that file as malicious, and a unique, anonymous identifier for the organization that submitted the file.  Conveniently, each entry also includes a field containing the total number of unique submitters for the file. This last field is just a little tricky, since each entry is really a summary up to the time the entry was created. It’s common for the same file to have multiple database entries over time. In these cases, I used the max value of the total submitters field from all of the database entries for that file.
I filtered the dataset by the following criteria to identify files of interest:
These criteria resulted in 11,316,757 unique files and associated metadata returned.

Of course, with this analysis we’re making some assumptions, so let me first list them here:

Because the dataset already contained the number of unique submitters for each file, the analysis was straightforward: I made a histogram to count the number of times each value “number of submitters” occurred. That is, I counted how many times there was exactly one submitter, exactly two submitters, etc.  I counted to 10 submitters, and then lumped anything over 10 into a single “more than 10 submitters” category.  The following table summarize the counts in each category, as well as the percentage of the whole each category represents:

If you prefer to see this visually, here’s what the histogram looks like:

As you can see, most malicious files (91.81%) were submitted from only a single source. There were also a substantial number of files submitted by exactly two (5.74%) or three (1.02%) sources. Together those three categories account for 98.57% percent of all malicious files. All the other categories were well below 1% of files (“4 submitters” was at 0.42% and they fell sharply from there).

Even lumping the remaining values into a “more than 10 submitters” category accounted for only 0.33% of all files.  If we expect to detect third-party hash values on our own networks, we’d need to see many more files fall into this category. There’s no specific threshold for what this number should be for third-party hashes to be useful for detection, but 0.33% is well under any reasonable effectiveness threshold.

There are a few situations in which hashes might be useful for detection.  The first is when you have a certain piece of malware already on your systems and you’d like to find additional systems with the same file.  We can call these first-party hashes, since they occurred on your own network. If the malware is already in your environment and you collect the hash from one of your own infected systems, you have a reasonable chance that other files with the same hash are also deployed on your other systems.  This is technically detection, but likely to be detection deployed in support of an incident response, which makes it just different enough that first-party hashes could be effective.
Another such situation might be when the third-party hash was observed at another organization with close ties to your own, for example a business partner or a subsidiary. In certain cases, you might also include other organizations sharing similar characteristics to yours, perhaps in your same industry or geographic location. In this scenario, third-party hashes may be useful, especially if the different organizations involved are targeted by the same actor, perhaps as part of the same campaign of activity.

By using submissions to VirusTotal as a proxy for how many organizations observed each file, the data supports my hypothesis that hash values from one network are unlikely to also be observed on other networks. 91.81% of all files were submitted by only a single submitter, as was expected. The number of files submitted by exactly 2 or 3 submitters was not expected but still in line with the hypothesis. Only 0.33% of files were submitted by more than 10 organizations. For third-party hashes to be effective for detection, this number would need to be much higher.
Please stop using third-party hash values for detection.
Posted by DavidJBianco at 7:14 PM 1 comment: